This listing was posted on Adopt-a-Pet.com. 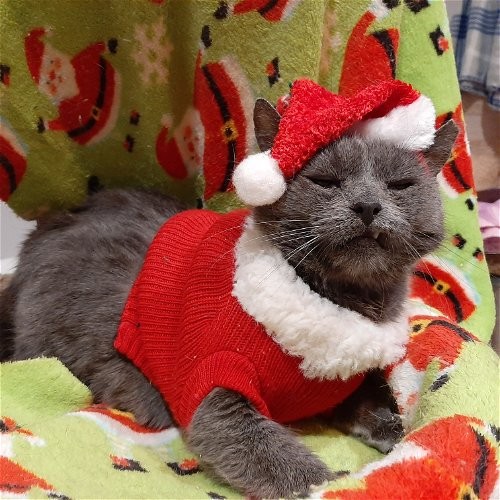 Tools
Location:
Hampstead, NC
Description:
Miracles happen every day, but sometimes, you just shake your head and say "how"? How in the world did this feral, injured cat, living in a colony, survive? I began, one by one, trapping all the cats in a Hampstead colony of 20+ feral cats. Each one needed medical care, spay/neuter surgery, treatment for fleas, worms, etc. The cats had never really been handled, but it amazed me how quickly they showed me how grateful they were.......unbelievable purrs, stretching out the paws as if making biscuits and the happy meows at me when I would check on them in their recovery cages. One kitty, though, REALLY made an impression on me......I named him "GRIGIO". I had a lot of trouble catching GRIGIO, but finally after much persistence and trips back and forth to the colony, I got him! When I got him home, I could quickly see that he had many issues that he had been living with which was why he was hard to catch. When I talked to the colony caretaker that feeds the cats, I quickly realized that this cat had been hit by a car. His face was a little smashed in, his tongue stuck out a lot, his eyes watered, his breathing was muffled and he had a runny nose. Worst of all, GRIGIO was mostly blind. His eyes were about half open most of the time, but after several vet visits, I learned that GRIGIO had been just trying his best to survive. His body is fine, but his face took the brunt of the accident. GRIGIO quickly warmed up to the idea of feeling safe, having regular meals (where he didn't have to worry about other cats stealing his food) and being petted! He now is healthy and doing great! He wags his tail a lot, sticks out his tongue and shakes his head (like a dog!) when he is happy! He loves to rub on my legs and head butt me (and some of his new kitty friends at FURR). GRIGIO will never be able to see 100% and he will always have a little bit of a runny nose, but he is sooooooooo happy now! All he needs is that selfless person that is willing to take a not-so-perfect kitty that will give love back 100 times in return! Could it be you? Could you be that person to save him.........not because you are trying to save yourself & get that perfect cat, but because you want to save him? In the end, after all is said and done, if you adopt GRIGIO, YOU will be the one that is rescued! There is no doubt about that! I have had no problem wiping GRIGIO'S nose for him, giving him lots of good food to eat, rubbing and petting him to make him happy and just feeling the joy exude from this reformed cat! Anyone, in my book, would be lucky to be his caretaker to this one special cat. The fact that he survived out in the colony being half blind, skinny and unable to really defend himself, is a miracle! I'm so glad he was finally able to figure out how to get in the trap I set for him! I have really grown to love this kitty to pieces and I am going to hold out for just the right home for him! FURR adopts to approved homes only in the Wilmington/Hampstead area.
Breed:
Russian Blue
Category:
Cats
Color:
Blue
Sex:
Male
Posted:
August 26 2020 on Adopt-a-Pet.com
Tools

To learn more, visit the Safety Center or click here to report this listing.